Reading through various stories, encounters and events about him for the past week really made one feel totally humbled and full of respect for this extraordinary figure that puts Singapore on the world map.

We decided that we had to make the trip to pay our last respect to this honorable man and thank him for all he did for us his entire life.

We went on the last day after almost a whole week of mourning and managed to reach around 8am.

We brought the kids along as we wanted them to also thank the great man and give their respect although they are probably totally clueless. And we were extremely thankful that we were in the priority queue because we had kids under 6 years old.

We walked from Raffles City building, carried the stroller down and up the staircase via the underground walkway and were redirected to a different queue from this point onwards.

We really started queuing from this point onwards 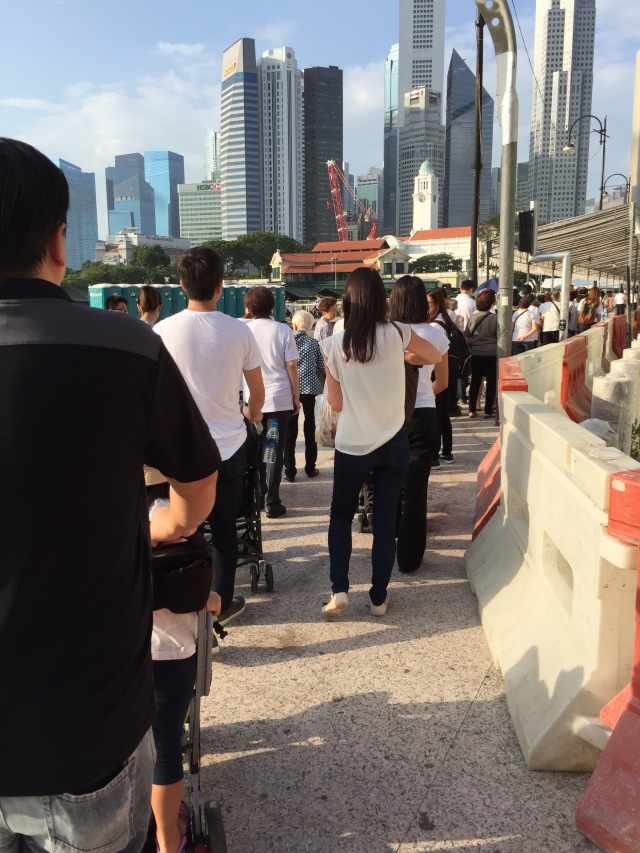 We met many kind souls along the way who offered to help hold or carry the kids and also lift the stroller whenever there’s a curb. Deeply touched by the Singapore spirit at this point in time.

There were more food and drinks distribution points along the way and make shift toilets.

And we reach the bag check area surprisingly fast.

The next thing we know we were on our way in.

We almost missed it until we started to see people bowing. It was quite rushed so we didn’t really feel the atmosphere until after we were out and settled down.

We were glad we made it here and expressed our most sincere thanks to great man, our founding father.

Thank you again, Mr Lee Kuan Yew. You are the best thing that ever happened to us.